You asked; we delivered. Introducing the all-new Prodigy XS in 2 fresh colours Chrome and newly released M.O.S. This Xtra Small pro scooter boasts the same great quality and ride as its classic big brother, the Prodigy, and packs a punch when it’s shredded at the skatepark. This scooter is for you

The Prodigy XS lives up to its prodigious name by being the mini pro scooter on the market with exceptional capabilities. Its smaller bar width and deck length is tailor made to suit the younger rider, starting from as young as 4 years old, and is first choice amongst young shredders.

Its stunt and safety focussed design includes classic Prodigy parts such as the sturdy Aluminium Reaper V2 bar coming in at a smaller height and width, wrapped with a Two Bolt 6061 Aluminium standard aluminium clamp and TPR Handgrips. The Prodigy 6061-T6 Aluminium Deck features a base cut out which has been innovated to reduce weight and maintain ultimate performance, making it perfect for the shorter rider. The mini version of the Prodigy rolls on the same 120mm Gap Core Wheels as its Prodigy big brother, and features the Diamond 6061 Aluminium Fork with IHC compression.

There are no reviews yet. 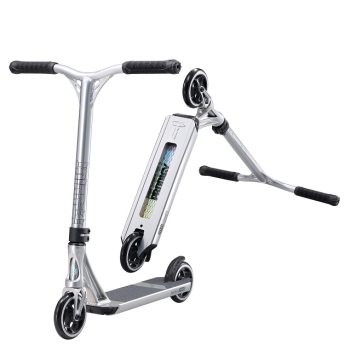